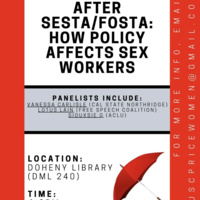 Current policies, such as SESTA/FOSTA, attempt to dismantle the sex work industry and endanger the safety of sex workers. This panel will address many of these policies through a discussion between sex workers, podcasters and academics.
We will be serving food (vegetarian options available).