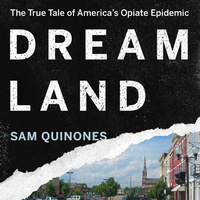 Addiction in Dreamland: A Conversation with Sam Quinones

Addiction in Dreamland: A Conversation with Sam Quinones

DESCRIPTION:
The misuse of and addiction to opioids is a national crisis that affects public health as well as social and economic welfare. Why is the opioid epidemic so widespread and so fatal, and what is the antidote? How have technology, social media, and the pressures of 21st-century society contributed to the skyrocketing rates of addiction across the United States? And what has happened to the “American Dream”? Is there more pain and loneliness than ever before in America? Explore these topics and more in a conversation with former L.A. Times reporter Sam Quinones, author of the National Book Critics Circle Award–winning Dreamland: The True Tale of America’s Opiate Epidemic. The conversation will be moderated by Melissa Durham, assistant professor of clinical pharmacy at USC.

Sam Quinones is a Los Angeles–based freelance journalist and author of three books of narrative nonfiction. His latest book is Dreamland: The True Tale of America’s Opiate Epidemic, winner of the National Book Critics Circle Award and named one of the best books of 2015 by Amazon.com, Slate, Buzzfeed, Audible, and newspapers across the United States. Quinones’s previous books grew out of his ten years of living and working as a freelance writer in Mexico: True Tales from Another Mexico: The Lynch Mob, the Popsicle Kings, Chalino, and the Bronx and Antonio’s Gun and Delfino’s Dream: True Tales of Mexican Migration. Quinones was a reporter with the L.A. Times from 2004 to 2014.

Presented by USC Visions and Voices: The Arts and Humanities Initiative. Organized by the USC School of Pharmacy.