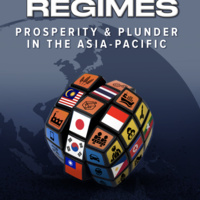 T.J. Pempel - A Region of Regimes: Prosperity and Plunder in the Asia-Pacific

Decades of rapid economic growth in East Asia mask the diverse national paths to growth as well as cases of conspicuous failure. Part 1 of T.J. Pempel’s new book, A Region of Regimes, analyses ten countries over forty years to reveal three major patterns, or regime types. Each regime type has a distinct combination of political institutions, socio-economic forces, and international influences. These regime types are labelled “developmental,” “ersatz developmental,” and “rapacious.” Each regime type, in turn, fuses with a discrete economic paradigm, some conspicuously more conducive to long range growth than others. Part 2 analyzes subsequent regime reorientations among the developmental regimes, the Chinese regime as a hybrid of all three regime types, and finally, the linkage between regime interactions and the changing regional order. The talk will outline the book’s key findings and move on to examine a portion of Part 2, namely, how the developmental regimes in Japan, Korea and Taiwan became reorganized in the late 1980s to early 1990s. All three faced an escalating series of international and domestic challenges to prior cohesion and embedded mercantilism. These challenges weakened regime unity and the prevailing policy paradigm. In all three cases, adjustments involved complex dramas pitting entrenched regime beneficiaries against contenders brandishing new resources as they challenged the status quo. However, even though regime bonds loosened they did not dissolve.  Deeply institutionalized relationships and entrenched advantages proved highly effective at preventing total regime breakdown. Thus, none of the regimes collapsed completely; instead, all three underwent substantial reconstruction.

Bio
T. J. Pempel is the Jack M. Forcey Professor Emeritus of Political Scientist at the University of California, Berkeley. From 2001 until 2005, he also directed Berkeley’s Institute of East Asian Studies. He received his Ph.D. from Columbia University in 1972 and has specialized in comparative politics, American foreign policy, Japanese political economy and Asian regional relations. He previously held positions at Cornell University, the University of Colorado, the University of Wisconsin and the University of Washington. He has received numerous research grants, including those from the Fulbright Commission, the U.S.-Japan Friendship Commission, the National Science Foundation, the Luce Foundation, and the MacArthur Foundation. A presidentially-appointed member of the Japan-U.S. Friendship Commission from 2009 to 2020, he was also awarded the Japanese Foreign Ministry Commendation in 2016. He serves on the editorial boards of a dozen professional journals and is the author or editor of twenty four books and over 120 articles. Among his major publications are Regime Shift: Comparative Dynamics of the Japanese Political Economy and Uncommon Democracies: The One-Party Dominant Regimes. His latest book, A Region of Regimes: Prosperity and Plunder in the Asia-Pacific, was published by Cornell University Press in 2021. He can be reached at pempel@berkeley.edu.