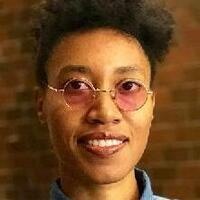 A Reading with Venita Blackburn

Join Venita Blackburn for a reading on October 24th!

Venita Blackburn's works have appeared in Electric Literature, the Virginia Quarterly Review, the Paris Review, The Spectacle, Los Angeles Review of Books Print Quarterly Journal, American Short Fiction, the Georgia Review, and others. She was awarded a Bread Loaf Fellowship in 2014 and several Pushcart prize nominations. She received the Prairie Schooner book prize for fiction, which resulted in the publication of her collected stories, Black Jesus and Other Superheroes, in 2017. In 2018 she earned a place as a finalist for the PEN/Bingham award for debut fiction, finalist for the NYPL Young Lions award and recipient of the PEN America Los Angeles literary prize in fiction. Current projects include finishing a new novel, a collection of flash fiction and creative non-fiction.  She is the founder and president of Live, Write, an organization devoted to offering free creative writing workshops for communities of color. Her home town is Compton, California, and she is an Assistant Professor of creative writing at California State University, Fresno.

"Venita Blackburn makes an indelible impression with her first collection of short stories. . . . Whether she embarks on writing novels or sticks with more short work along the line of Black Jesus and Other Superheroes, Blackburn is a writer to watch, but more importantly, to read."