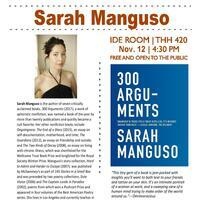 A Reading with Sarah Manguso

Join Sarah Manguso for a reading on November 12th!

Sarah Manguso is the author of seven critically acclaimed books. 300 Arguments (2017), a work of aphoristic nonfiction, was named a book of the year by more than twenty publications and quickly became a cult favorite. Her other nonfiction books include Ongoingness: The End of a Diary (2015), an essay on self-documentation, motherhood, and time; The Guardians (2012), an essay on friendship and suicide; and The Two Kinds of Decay (2008), an essay on living with chronic illness, which was shortlisted for the Wellcome Trust Book Prize and longlisted for the Royal Society Winton Prize. Manguso's story collection, Hard to Admit and Harder to Escape (2007), was published by McSweeney's as part of 145 Stories in a Small Box and was preceded by two poetry collections, Siste Viator (2006) and The Captain Lands in Paradise (2002), poems from which won a Pushcart Prize and appeared in four volumes of the Best American Poetry series. She lives in Los Angeles and currently teaches in the low-residency MFA program at Antioch University.

“Inventive. . . . All of life’s great subjects are here―love, relationships, happiness, desire, and vulnerability on the personal side; effort, luck, envy, and success vs. failure on the professional side―in one- and two-sentence nuggets of compressed insight. . . . It will require multiple rereadings to absorb the book’s rewarding wisdom.”
―Publishers Weekly