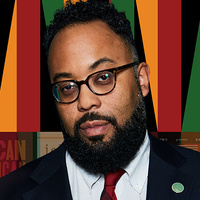 A Reading and Conversation with Poet Kevin Young

DESCRIPTION:
“Kevin Young is one of the most important poets of his generation.”—Washington Post

“Keeping up with him is like trying to keep up with Bob Dylan or Prince in their primes. Even the bootlegs have bootlegs.”—New York Times

Join us for an inspiring afternoon with Kevin Young, award-winning poet, author, director of the Smithsonian’s National Museum of African American History and Culture, and poetry editor of The New Yorker. In this special event, Young will read from his poetry and discuss his work with USC professor Robin Coste Lewis, recipient of the National Book Award in poetry for Voyage of the Sable Venus, and USC President Carol L. Folt.

The director of the New York Public Library’s Schomburg Center for Research in Black Culture from 2016–2020, Young is the author of 13 acclaimed books of poetry and prose, most recently Brown; Blue Laws: Selected & Uncollected Poems 1995-2015; and Book of Hours. His collection Jelly Roll: a blues was a finalist for both the National Book Award and the Los Angeles Times Book Prize. Young’s second nonfiction book, Bunk: The Rise of Hoaxes, Humbug, Plagiarists, Phonies, Post-Facts, and Fake News, won the Anisfield-Wolf Book Award in Nonfiction.

The distinguished poet, essayist, and former professor is a member of the American Academy of Arts and Sciences and was named a Chancellor of the Academy of American Poets in 2020.

Presented by USC Visions and Voices: The Arts and Humanities Initiative as part of USC Amplified.