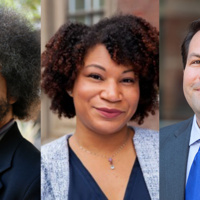 A Juneteenth Conversation on Race

Juneteenth is the oldest celebration commemorating the end of slavery in the United States. But the fight against institutionalized racism continues today. Join USC experts as they discuss voting rights, criminal justice reform, and the ongoing struggle for liberty and justice for all.

Jody David Armour. Jody Armour is the Roy P. Crocker Professor of Law at USC. Armour's expertise ranges from personal injury claims to claims about the relationship between racial justice, criminal justice, and the rule of law. He studies the intersection of race and legal decision-making as well as torts and tort reform movements. Armour teaches students a diverse array of subjects, including Criminal Law, Torts, and Stereotypes and Prejudice: The Role of the Cognitive Unconscious in the Rule of Law.

Alaina Morgan. Alaina Morgan is an Assistant Professor in the Department of History at USC. Trained as a historian of the African Diaspora, Professor Morgan's research focuses on the historic utility of religion, particularly Islam, in racial liberation and anti-colonial movements of the mid-to late-twentieth-century Atlantic world. Morgan teaches classes on African American and African Diaspora History; Islam in the Americas; race and ethnicity in America; mass incarceration, discipline, and racialized punishment; Black intellectual history; and Black international movements.

Christian Grose. Christian Grose is Associate Professor of Political Science and Public Policy at USC. He is the Academic Director of the USC Schwarzenegger Institute for State and Global Policy, where he led a team that administered the USC Schwarzenegger Institute nonpartisan democracy grants to local election administrators to open new polling places; and he is now researching how best to improve voter access and voting rights based around this community-engaged work.