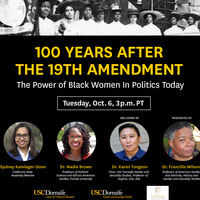 A Hundred Years After the 19th Amendment: The Power of Black Women in Politics Today

This virtual discussion marks the 100th anniversary of women’s suffrage in the United States. The expansion of the vote to women in 1920 has come a long way, finally providing for the full enfranchisement to women of color following the passage of the Voting Rights Act of 1965. The slow and steady introduction of women of color into the U.S. electorate has driven the entrance of diverse elected officials as political representatives. This panel focuses on the importance of women’s voting and its impact on the development of diverse leadership in US politics.

Historically, what has happened since, and what remains to be done? How has women’s support evolved over time, and how do we think about the ways in which women’s votes shape women’s candidacies for higher office? As a USC Dornsife Center for Feminist Research event, co-sponsored with the USC Dornsife Department of Gender & Sexuality Studies, and in partnership with the Streisand Foundation, we welcome you to join our virtual conversation, with speakers California State Assembly Member Sydney Kamlager and Purdue University Professor of Political Science and African American Studies Dr. Nadia Brown, honoring the past, present, and future of the 19th amendment, the role of Black women, and women in politics through an intersectional lens.

Department
Gender and Sexuality Studies, Dornsife College of Letters, Arts & Sciences
Add this to your calendar