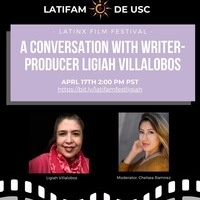 A Conversation with writer-producer Ligiah Villalobos

Join LatiFAM for a virtual conversation with the writer and producer of La Misma Luna/Under the Same Moon(2007), Ligiah Villalobos.

Ligiah Villalobos is a Writer, Producer, Consultant, and Lecturer.  She is best known for the independent feature film Under the Same Moon, (La Misma Luna), which she wrote and executive produced. The film was released by Fox Searchlight and The Weinstein Company in 2008 after it was acquired at the Sundance Film Festival, where it became the highest sale for a Spanish-language film in the history of Sundance.  Made for under $2M, the film earned over $23M worldwide.

More recently, Villalobos was a Cultural Consultant on the Academy Award winning Pixar movie, COCO, which has become the highest grossing movie of all time in Mexico (and highest grossing Pixar movie in China).  She is also the recipient of the Humanitas Prize, for writing the Hallmark Hall of Fame movie, Firelight, produced by Alicia Keys and Mary Martin, which aired on ABC in 2013. (Read full bio here)

This event is part of the Latinx Film Festival hosted by LatiFAM de USC. Follow @latifamdeusc on social media and visit our website https://latifamdeusc.wixsite.com/latifam for more info on the featured filmmakers and Festival events!

Direct questions and concerns to latifamdeusc@gmail.com