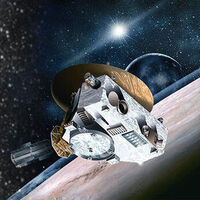 Brought to you by the American Instutute of Aeronautics and Astronautics, Los Angeles-Las Vegas Section (AIAA LA LV).

Mission to Pluto and Beyond

Join AIAA LA LV on October 3rd, 2020, at 10 AM for a talk by Alice Bowman, the New Horizons Mission Operations Manager (MOM), Alice will talk about the voyage of NASA’s historic mission to Pluto and the Kuiper Belt– which culminated with the first flight past the distant dwarf planet on July 14, 2015 and the first encounter with a Kuiper Belt object (KBO) on January 1, 2019. She’ll speak about this continuing journey through the eyes of the APL mission operations team and describe some of the technical, scientific, and personal challenges of piloting the New Horizons spacecraft across the solar system on its voyage to the farthest reaches of the planetary frontier.

Alice Bowman is a member of the Principal Professional Staff at the Johns Hopkins Applied Physics Laboratory (APL) in Laurel, Maryland. She is the Space Mission Operations Group supervisor and the NASA New Horizons Mission Operations Manager (MOM). She supervises approximately 50 staff members who operate deep space and Earth-orbiting spacecraft, including NASA’s TIMED, STEREO, New Horizons, and Parker Solar Probe. As the New Horizons MOM, Alice leads the team that controls the spacecraft that made a historic flyby of the Pluto system in July 2015. And on New Year’s 2019, just after midnight, New Horizons made history again with a flight past the Kuiper Belt object Arrokoth – the most distant flyby ever conducted, 4 billion miles from Earth. Prior to operating spacecraft, she worked in the fields of computer modeling, drug research and long-wave detector research.

Alice has a degree in chemistry and physics from the University of Virginia and has more than 30 years of experience in space operations. She is an associate fellow of the American Institute of Aeronautics and Astronautics and has served on the International SpaceOps Committee since 2009.

A survey of past, present, and future aircraft using electric motors to drive propellers, including applications and trade-offs that drive the aircraft design. This rapidly evolving field includes personal sport aircraft, and flight training aircraft that promise lower per hour costs, while providing sufficient flight endurance for much of the typical training activity. There is also much development activity in the future market of urban mobility, and even hybrid powered transport aircraft still in the concept phase.

Rhon grew up in Dayton, Ohio near WPAFB, and got to see all kinds of military planes flying over his house. His Dad took him to air shows, so he gained an interest in aviation at a young age. While earning a PhD in electrical engineering at the University of Illinois, Rhon took flight training as some of his courses, ultimately earning a commercial pilot license, rated to fly single and multiengine airplanes, gliders, and helicopters; and a flight instructor rating for airplanes, instruments, and gliders.

After moving to California, Rhon taught flying part time while working as an engineering manager, and now co-owns a Cirrus SR22, in which he and his wife enjoy many flying trips. Past trips included flying northwest to Banff, northeast to New Jersey, southeast to Bahamas, and southwest to Cabo San Lucas. In 2015, he first flew his Early Bird Jenny, which he built from plans.

After retiring in 2011 as a Program Manager at Northrop Grumman, he now gets to spend more time at the airport playing with airplanes. Partly based on his experience building the Early Bird Jenny, Rhon recently obtained his Airplane & Powerplant Mechanic rating. Rhon is active in the Experimental Aircraft Association, Civil Air Patrol, Western Museum of Flight, and gives presentations to pilots as an FAA Safety Team representative. He is also a member of IEEE, AIAA, and AAAS.

Detection of phosphine in the atmosphere of Venus

This September, phosphine (PH3), a gas considered as a biosignature for terrestrial atmospheres, has been detected in Venus' cloud deck by two different telescopes in the same mm waveband spectral line, at a 20 parts per billion level. No known mechanism could explain the presence of phosphine, and so far unknown chemistry or biological processes must be invoked. Much has been said about this discovery, and an astounding buzz ensued, propelling Venus at the top of the list of astrobiological targets in the eyes of the mainstream media. I will provide some important necessary elements about the weird atmospheric chemistry of Venus, reminding us to keep a cold-headed approach in the interpretation of this discovery.

Thomas Navarro is a research scientist at UCLA and McGill University, studying the climate of extraterrestrial planets. He is a participating scientist of the Japanese mission Akatsuki, currently the only spacecraft orbiting Venus.