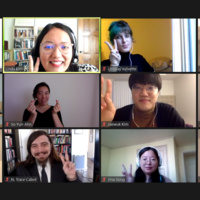 The USC Korean Studies Institute is pleased to announce the ninth annual virtual graduate student symposium. This symposium aims to professionalize graduate students, nurture their scholarship, and create interdisciplinary networks of Ph.D. students working on research related to Korea, East Asia, and/or Asian diasporas. The symposium provides students from various institutions with the chance to meet and share research in progress with their peers and participating faculty. In addition, participants can engage with a faculty panel that will build their professional and research skills.

Ben Engel (Seoul National University, East Asia Studies), “Koreagate Revisited: From the Shadows to the Halls of Congress and Beyond”

Danyale Kellogg (Texas A&M University, School of Government), “Revolution and Influenza in the Air: The 1918 Flu Pandemic’s Role in the March 1st Movement in Japanese-Occupied Korea”

This panel invites professionals in various disciplines and career tracks to share their experience with graduate students and discuss general topics related to research, academic careers, and professionalization. Graduate students in all fields are encouraged to participate.

Helen Cho is a PhD candidate in the School of Journalism and Mass Communication at the University of Wisconsin-Madison. Her research examines how mass media produces narratives about difference, and how media narratives about difference are part of how we make sense of our place in the world. She asks questions about race, identity, and media in both the domestic context through examining Asian American self-presentation and media representation, as well as internationally by examining how news narratives about difference are produced in media coverage of east Asia, particularly the Korean peninsula. She received her master’s degree from Georgetown University and her bachelor’s degree from Northwestern University’s Medill School of Journalism.

Jung Hyuk Lee is a third year PhD student in USC economics. I specialize in the implications of gender in the labor market and family resource allocations, particularly under the context of Korea and other developing countries. I primarily use econometric techniques and experiments in order to shed light on the causality behind statistics.

Junhyeok Jang is a Ph.D. candidate in Political Science at the University of California, Merced. I study authoritarian politics and democratic backsliding, focusing on the interaction between political
institutions and information control. To test hypotheses derived from my theories, I apply cutting-edge quantitative methods, such as causal inference in TSCS analysis, machine learning, and computational text analysis.

Benjamin A. Engel is a Ph.D. Candidate at Seoul National University’s Graduate School of International Studies where he focuses on modern Korean history, US-ROK relations, and South Korean democratization. He also completed his Master’s Degree at the same school in Korean Studies. He was a Research Associate at the Institute for Peace and Unification Studies at Seoul National University from 2016 to 2019 and a Research Associate at the East Asia Institute from 2015 to 2016. His most recent publications are entitled “Aiding and Abetting: Role of Foreign Missionaries in the South Korean Democracy Movement” (Korea Observer Vol. 51 No. 1) and “Viewing Seoul from Saigon: Withdrawal from the Vietnam War and the Yushin Regime” (Journal of Northeast Asian History Vol. 13 No. 1).

Brian Park is currently a student at Harvard University's Regional Studies-East Asia MA program. My research interests are in modern Korean history and the Korean diaspora. I received my BA in Global Studies from the University of California, Santa Barbara.

Kim Lacey is originally from Seoul, South Korea. She got her BA from Bowdoin College in Eurasian and East European Studies and MA from the University of Chicago before joining the PhD program at Washington University in St. Louis. Her research interests include migration and diaspora in the borderlands of the former Japanese Empire and the Russian Far East.

Danyale C. Kellogg is a Master of International Affairs student and graduate research assistant on the National Security and Diplomacy track with concentrations in East Asia and Pandemics and Biosecurity at the Bush School of Government and Public Service at Texas A&M University. She is also in the Global Health Graduate Program in the Texas A&M School of Public Health where her research focuses on USFK's preparedness for an infectious disease outbreak. She is a current Women in Defense HORIZONS Scholar with the National Defense Industrial Association, a Global Health Research Intern with HHS Office of Global Affairs Asia-Pacific Office, is completing her capstone with the China Strategic Focus Group of USINDOPACOM, and has previously interned for the U.S. Congress, DoD, and DHS through the Secretary's Honors Program. She previously earned her BA in History at Southwestern University after completing her undergraduate thesis on U.S. strategic and intelligence failures surrounding the Chinese intervention in the Korean War.

Seoyeon Lee is a second-year Ph.D. student majoring in East Asian Languages and Cultures at the University of Southern California. She graduated from Ewha Womans University with a Bachelor's and a Master's degree in Chinese Language and Literature. Her current research interest is science fiction literature in Korea and China. She is interested in the intersection of contemporary Korean and Chinese
science fiction writers’ works while exploring possibilities of imagining an alternative world beyond the boundary of gender and race.

Xiaoyu Xia is a PhD candidate in East Asian Languages and Cultures at UC Berkeley. Her dissertation explores how attention to typography can afford new ways of interpreting modern Chinese literature. In addition to her training in Chinese studies, she is interested in Sino-Japanese literary contact, Japanese colonial literature, and issues of vernacularity and linguistic modernity in a transnational and intra-East Asian context. She is currently a Visiting Research Fellow at Waseda University.

Seo-Hyun Park is an Associate Professor of political science in the Department of Government and Law at Lafayette College. She specializes in international relations and East Asian security, with a focus on issues of national identity, sovereignty, alliance politics, regionalism, and East Asian politics. Her current research project examines the proliferation of political violence among state and nonstate actors in late nineteenth century East Asia. Her book, Sovereignty and Status in East Asian International Relations (Cambridge University Press, 2017) is a theoretical and empirical analysis of a key concept in East Asian security debates, sovereign autonomy, and how it reproduces hierarchy in the regional order. Her work has also been published in journals such as International Relations, Review of International Studies, International Studies Review, Journal of East Asian Studies, Asian Perspective, Chinese Journal of International Politics, and Strategic Studies Quarterly. She received her Ph.D. in Government from Cornell University in 2009 and have held visiting research positions at Yonsei University, the University of Tokyo, and Harvard University. In addition, she worked as a research fellow at the Shorenstein Asia Pacific Research Center (where she was also an instructor in the Korea Studies Program) at Stanford University and a predoctoral fellow at Stanford’s Center for International Security and Cooperation (CISAC).

Chin-Hao Huang is an Assistant Professor who specializes in international politics, with a focus on China’s foreign policy, Southeast Asian politics, and United States (US)-China relations. He is the recipient of the Lee Kong Chian National University of Singapore-Stanford University Distinguished Fellow on Contemporary Southeast Asia (2018-2019) and the American Political Science Association’s Foreign Policy Section Best Paper Award (2014). He is the author or co-author of three books, and has research articles published or forthcoming in International Organization, The China Quarterly, The China Journal, Contemporary Southeast Asia, and International Peacekeeping, and in edited volumes through Oxford University Press and Routledge, among others. He has testified on China’s foreign affairs before the US-China Economic and Security Review Commission, US Congress. He has also served as a consultant for US and European foundations, governments, and companies on their strategies and policies in Asia. Until 2009, he was a researcher at the Stockholm International Peace Research Institute, and prior to that worked with the Freeman Chair in China Studies at the Center for Strategic and International Studies in Washington, DC. His Doctor of Philosophy and Bachelor of Science are respectively from the University of Southern California and Georgetown University.