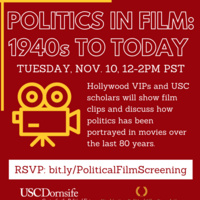 Politics in Film from 1940s to Today: Hollywood VIPs and USC Scholars Show and Tell about Campaigns and Elections

Join the Center for the Political Future and the Washington Political Film Foundation for a star-studded experience with some of the most influential political films from the 1940s to today.  An expert panel of Hollywood actors and producers, USC scholars, and political experts will examine how much or how little has changed in the last 80 years of politics as portrayed in film.

We will watch select film clips from the 1940s and 1950s then discuss. Next up will be film clips from the 1960s and 1970s followed by a discussion. Then 80s/90s with discussion, and finally 2000 to present, also with a panel-based conversation afterward. Film clips will range from Mr. Smith Goes to Washington to All The King's Men to EasyRider to Bulworth to Selma with at least 30 films more in the mix.

We will watch select film clips from the 194os and 1950s then discuss. Participants in Zoom will have the opportunity to ask questions to our panelists and chat with each other throughout the 2-hour program.

Special thanks to our partners, The Washington Political Film Foundation, which provides a unique, purposeful path for constructive political engagement that unleashes the power, promise, and creativity of political film.

Click HERE to register in advance for the webinar.

Department
Campus Humanities, Center for the Political Future
Add this to your calendar