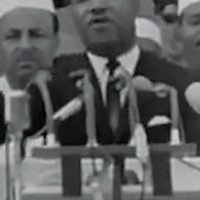 DESCRIPTION:
In celebration of the birthday of Dr. Martin Luther King, Jr., we are excited to present a special screening of the illuminating documentary MLK/FBI, followed by a conversation with Sam Pollard, its Emmy-winning and Oscar-nominated director who was deemed one of “cinema’s most dedicated chroniclers of the Black experience in America” by Film at Lincoln Center in 2021.

Released in 2020, MLK/FBI is the first film to uncover the extent of the FBI’s surveillance and harassment of the civil rights leader. Based on newly discovered and declassified files, utilizing a trove of documents obtained through the Freedom of Information Act and unsealed by the National Archives, as well as revelatory restored footage, the documentary explores the government's history of targeting Black activists, and the contested meaning behind some of America’s most cherished ideals. Featuring interviews with key cultural figures including former FBI director James Comey, MLK/FBI tells this astonishing and tragic story with searing relevance to our current moment.

The event will be introduced by USC President Carol L. Folt. Following the screening, USC Annenberg professor and award-winning journalist Miki Turner will join Sam Pollard for a conversation about making the film, its impact, and the legacy of Dr. Martin Luther King, Jr.

Sam Pollard is an Emmy Award–winning and Oscar-nominated filmmaker with over 100 films in his credits. In 2022 alone, he produced Lift, We Feed People, Outta the Muck, and American Experience, and directed Lowndes County and the Road to Black Power and episodes of Hostages. His many other works include documentaries for HBO, PBS, and the Discovery Channel such as Four Little Girls, When the Levees Broke: A Requiem in Four Acts, Slavery by Another Name, Sammy Davis, Jr.: I Gotta Be Me, ACORN and the Firestorm, Why We Hate, and Atlanta's Missing and Murdered: The Lost Children. Pollard also directed two episodes of the groundbreaking series Eyes on the Prize. Since 1994, Pollard has served on the faculty of New York University’s Tisch School of the Arts. He is a member of the Academy of Motion Picture Arts and Sciences and lives in New York City.

Miki Turner is an award-winning photojournalist, producer, author, and professor at the USC Annenberg School for Communication and Journalism. Her work has appeared in The Oakland Tribune, Ft. Worth Star-Telegram, Orange County Register, Chicago Tribune, Ebony, Jet, ESPN, MSNBC.com, BET.com, AOL.com , Essence, Caribbean Travel & Life, TheRoot.com, and other publications. She has curated exhibitions in Saudi Arabia, Florence, Italy, and Los Angeles, and her photo “Abaya Road,” was a prize winner at the 2015 Florence Biennale. Turner is the author of two photo books, journey to the woman i've come to love and tomorrow, and is currently working on a second volume of the journey series and an upcoming exhibition in Paris.

Presented by USC Visions and Voices, the USC School of Cinematic Arts, the USC Black Staff & Faculty Caucus, and the Center for Black Cultural and Student Affairs.