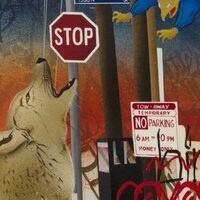 Join us for an exciting conversation with three artists from Los Angeles: Gajin Fujita, Alfonso Gonzalez Jr., and Devin Reynolds. Featured artists from the current exhibition Art & Hope at the End of the Tunnel will discuss their process and practice, inspiration, growing up in Los Angeles, and creating work during the pandemic. The evening’s discussion will be moderated by artist, curator, and USC Roski School of Art and Design alum Dulce Soledad. Followed by Q&A and refreshments.

Dulce Soledad Ibarra is a multi-disciplinary artist, curator,  educator,  designer,  and non-profit arts advocate with special interests in community and identity-emphasized arts and opportunity. As a practicing artist, Ibarra discusses issues of generational guilt and cultural identities in videos, installations, and performances, and recently has been inviting the public to partake in the dialogue via workshops and participatory work. Looking through queer Xicanx perspective, the work is fueled by emotional labor, personal research, and analysis. Ibarra has exhibited, screened, performed, and programmed at venues across Southern California, including Angels Gate Cultural Center, Charlie James Gallery, Consulado General de México en Los Ángeles, Craft Contemporary, Echo Park Film Center, Guggenheim Gallery at Chapman University, Human Resources Los Angeles, ONE Gallery, West Hollywood, Ontario Museum of History and Art, and Pieter Performance Space, among others. Ibarra holds an MFA from the University of Southern California and earned a BFA in Sculpture from California State University, Long Beach.

Alfonso Gonzalez (b. 1989, Los Angeles; lives and works in Los Angeles) is an artist whose work in painting developed from close observation of his father’s skillful trade in commercial sign painting. He draws inspiration in the permanence of hand-painted signage and the physical weathering remnants of Los Angeles to narrate his own familial histories of labor and image-making. By incorporating snippets of his immediate surroundings in his paintings Gonzalez elevates, documents, and reframes the vernacular economies of Southern California.

Devin Reynolds received a BA in Architecture from Tulane University in 2017. Originally from Venice Beach, CA, Reynolds grew up working as a deckhand on The Betty O, a local sportfishing boat. He was raised between flea markets, yard sales, and the beach. His first encounters with artmaking came in his early twenties in the form of graffiti. His obsession for graffiti took off when he began painting his assumed alias on the sides of freight cars that traverse the railroads of North America. Devin’s art practice finds itself at the intersection of graffiti and his love for nostalgic Americana design and sign painting, through the lenses of his biracial upbringing in Los Angeles. In 2018, his work was featured in the solo exhibition Tyrone Don’t Surf at Antenna Gallery in New Orleans. He has exhibited in group exhibitions at the Joan Mitchell Foundation, New York; Core Gallery, New Orleans; The Chamber, Tacoma, WA; UNO Gallery St. Claude, New Orleans; and the Ogden Museum of Southern Art, New Orleans, where he was awarded “Best in Show” in Louisiana Contemporary (2017). In 2018, he was awarded an Early Art Practitioners Residency at the Joan Mitchell Center in New Orleans.

“Art and hope at the end of the Tunnel” is a group exhibition curated by renowned art critic Edward Goldman; featuring dozens of artists who call the Los Angeles area home.

USC meets or exceeds provisions of the current Los Angeles County Department of Public Health Order of the Health Officer and related protocols to mitigate the spread of Covid 19.

Trojan Check symptom verification is required for all guests entering campus and at the museum. You must be prepared to display your symptom check pass at all checkpoints throughout the university campus. On the day of your visit, go to trojancheck.usc.edu to complete your symptom check.

This event will require masks indoors and outdoors for all attendees, vaccinated or unvaccinated. Masks should be worn at all times when individuals are not actively consuming food or beverage.

Unvaccinated individuals must maintain a 6’ physical distance from those outside of their household while consuming food or beverage.

Anyone refusing to comply with mask requirements is subject to removal from the event. Please note that protocols are subject to change.