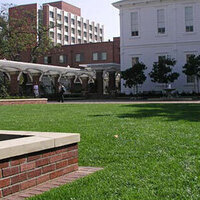 A beautiful grassy area punctuated with rose bushes and welcoming benches, Argue Plaza is located on the site of the 1984 Olympic Village. It is named in honor of John C. Argue, the alumnus and former chair of the USC Board of Trustees who was instrumental in bringing the 1984 Olympics to L.A.